July 2020 – Canadian cartoonist Bill Buttle passed in January, 2020 at the age of 79. He leaves behind a wonderful legacy of bridge cartoons that will be enjoyed by bridge players for decades more to come. Here’s a brief look at his life and quirky, unforgettable contributions to bridge humour.

If you’re a subscriber to the ACBL Bridge Bulletin, you’ll have either seen his bridge cartoons in passing – or waited for every issue until the next.

Bill’s cartoons were soon accepted for syndication in Toronto and cartoons under the names of Two’s a Crowd and Double Bill were printed in weekly papers across Canada. When newspapers began to decline Bill switched to drawing for Out of Hand, a series of bridge-related cartoons that typically featured a middle-aged couple bickering over the bridge table. These were picked up by the ACBL’s monthly magazine, the Bridge Bulletin, in 2007, and have appeared monthly since that time. As well, Out of Hand appears in all the ACBL’s Daily Bulletins at their National Bridge Championships. In an obituary note in the Bridge Bulletin March 2020, the ACBL promises to continue running Buttle’s cartoons for some time to come.

Bill’s illustrations also became well known on the covers of bridge books, including the popular Bridge in the Menagerie series by Victor Mollo and If I Only Had A Heart series by Alex Adamson and Harry Smith.

It’s easy to recognize Bill’s cartooning and illustrative style full of chinless humans, bright colours and great attention to just the right amount of detail. We couldn’t find any information about his techniques and tools, but the look of the works imply traditional tools, colours and screens with a bit of digital help in later years. 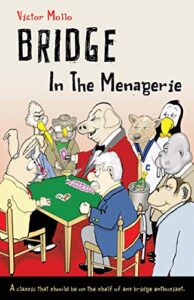 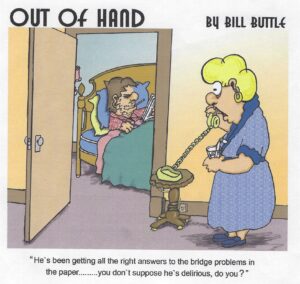 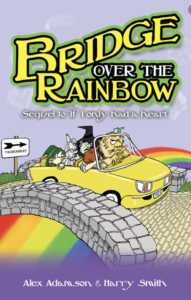 You can find collections of Bill’s bridge cartoons in Out of Hand… And Off the Fairway! and Out of Hand… Out of Mind.

During his life, Bill was also a musician playing guitar and banjo for Corduroy Road. It’s not often that anyone is able to combine a lifetime of bridge, art and music at the same time – but Bill was known for doing so with love and success.

His obituary from the Ottawa Valley News notes that he will be fondly remembered for his sense of humour, his cartoons, his love of music and his 1966 Volvo. Which Bill Buttle bridge cartoon do you remember best?

Thank you Bill for a good laugh.