Bridge software can provide online play, but because it resides on your computer you can play offline when you need to which is an advantage when you’re on the road.

Bridge software allows you to play a game with a robot/software or with friends online. Some bridge software presents as an app, some as a downloadable program, some as a browser-based program and some as a combination of all of these. As the technology advances the lines between software and app have blurred.

On this page, we specifically list software. These are the engines and robots behind many online clubs and apps. See the menu at left for contract bridge apps listings.

The list below is alphabetical. Medalists from the annual World Computer Bridge Championships are indicated next to their name. The last WCBC was held in 2019. The next is scheduled to be held at the 2023 World Championships, Marrakech, Morocco (August 20 – September 2)

WBridge5 won the World Championships for the first time in 2005. WBridge5 had already been very close to the Computer Bridge World Championship title for a few times before that, losing a final to Jack by 1 IMP in 2002, losing a chance in 2003 when Bridge Baron pulled a stunt and WBridge5 didn’t make the final by just a few points. In 2005 WBridge won its first Gold. In the final, which was broadcast live on Bridge Base Online, 4-time reigning World Champion Jack was defeated. Since then WBridge is always in the top 4, and is the reigning champions winning gold in 2016, 2017 and 2018.

Wbridge5 as the machine used in FunBridge (now GoToBridge) and is also available for online play on sites Bridge Now and BridgeEZ. Read more about this robot on Computer Bridge here ->

TCS BridgeBot is being developed by Tata Consulting Services, Prasad Ramesh Bokil, Prasad.Bokil@tcs.com. They played in the 2018 and 2019 Championships placing 6th in 2019.

Synrey Bridge made it’s appearance on the international stage in 2016 and won Silver against WBridge5. Website features an App recently ported into English. You can now play online with Synrey Bridge read about that here ->

Robo Bridge has participated in the World Championships a few times now, winning a Bronze medal last year. RoboBridge is also a web-based online Play Against the Robots.

Shark Bridge has been around for a while and continues to develop its software and interfaces. It’s available as an app or as software.

Some of these have both downloadable software and mobile apps – in these cases, we try to list the products both on this page and on our Contract Bridge Apps page.

My Bridge Trainer: Germany
Software to teach and practice Defensive Play, Beginner and Intermediate. With the MyBridge Trainer you can play Bridge for free in the demo version. The full version contains 151 hands. To learn more about the product, play the demo version free of charge and without obligation. Software available for Windows. Website: www.mybridge.shop

BJ Bridge is a contract bridge game for mobile devices, set up so that you can partner up with other players for a game or two via Bluetooth connection.

GnuBridge is a bridge game designed for Linux, described as “open source” – which means that programmers are welcome to add their two cents to the software, and it’s completely free to modify and play.

XContractbridge is a Contract Bridge simulator for Windows and Linux. It was sent to us by Chris Burkinshaw of Bitbase Software. Thanks! You can download a free trial for Windows or Windows Mobile.

Quick Bridge was developed and sent to us by Wesley Steiner. Downloadable to Windows, the software is also available as a web-based game. 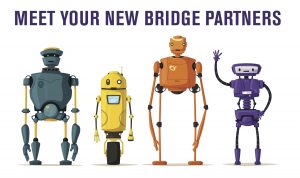