Reprinted from Bridge Winners with permission.
By Alan Rickayzen

For many bridge players, the game is a social activity played at home with friends rather than in a club or online. Lockdowns have prevented this. And although lockdowns are easing, there are still many not willing to take the risk of playing at the same table until… who knows.

Going online is a partial answer, so I’ve summarized the learnings I’ve gained helping my father and his over 90’s friends migrate to online.

1. A mobile phone plus a laptop/PC is essential. The mobile is for voice and the laptop/PC for playing.

2. Get each of the players familiar with the mobile app first before starting the group online together. We used WhatsApp. I created a group for the four of us, and use a voice call to get us all dialed in with each other first. Video hogs too much bandwidth in rooms where wifi connectivity is poor.

3. Establish a screen-sharing tool to prepare the way for online playing. I used www.jitsi.org so you can share your screen (or see their screen) to train the users. Separately, get each of the players familiar with the online bridge user interface before starting the group online together.

4. We used BBO as the bridge platform. Show each player how to register, how to join a game, how to bid and play cards. A tablet instead of a PC/laptop is possible, but it’s very confusing if players are on different user-interfaces so I strongly recommend sticking to PC/laptops.

5. Once all have been trained, you can start your first online session. Make sure you start the voice channel first (e.g. WhatsApp on the mobile – with all phones switched to speaker mode).

6. Prepare contingency plans for when someone loses the connection. That’s trickiest for voice. I discovered that agreeing that everyone aborts the voice call until I start a new group call worked best because the person losing voice connection often didn’t realize this.

7. Now you can play. For us, one hour sessions worked best.

a) Show the players how to create a shortcut for the screen-sharing tool and another for the online bridge platform to make future sessions easy to access. With Jitsi you can create the shortcut to one standard meeting so the players instantly join the meeting and invitations don’t have to be sent every time. Zoom or Skype might be good equivalents but I wanted to avoid software installation. This tool is only essential for the initial training sessions. It is not used when the group joins.

b) Unfortunately, no operating system (Windows, Chrome, Mac) offers a “simple” mode ensuring all players see the same application in the same way. So make sure the players kill all browser tabs and all applications on the pc/laptop before starting and make sure they have their browser full size (maximize) to avoid problems with off-screen buttons, windows obscuring other windows, wrong tab selected…. The list is endless.

c) It is a real bee in my bonnet that Operating System UIs have got so complicated and none offer a standardized simple-mode. E.g. Sound on, mouse moves the width of the screen when moved from one side of the mouse-pad to the other, only one browser tab possible. All apps show full-screen…..

d) Chat simply didn’t work in practice. Too often a player chatted to the lobby instead of the table. A separate voice channel is essential. Land-line telephone-conferencing might work instead of WhatsApp but I wanted to avoid international charges with me being in Germany and the other three in the UK. Houseparty might be a good alternative to WhatsApp but they all had WhatsApp installed on their mobiles already.

e) Stop a session too early rather than too late. If technical problems dominate then abort and get things going another day before trying again. We often forget how challenging technology can be for older less physically capable people. And on top of that older people all-too-quickly blame themselves rather than the technology. Avoid self-deprecation at all costs.

i) I had originally intended to be the instigator and leave discreetly once all four were familiar enough with the setup, but unfortunately the fourth player is averse to any technology at all. So the social chatting is inhibited by having an outsider present (me).

iii) At our first session we only managed to play 2 hands. But we now play about 9.

iv) Using the screen-sharing (3) you can go over hands another time with individuals. I’m hoping the group will eventually do this between themselves. This gives me a nice thread of conversation with my father. Let’s face it, there’s not a lot going on when you’re isolated.

v) I’ve learned all sorts of fascinating fragments of history from the two strangers in the group. Hearing their personal experiences of events that I’d only heard about from books was an unexpected and valuable reward for me.

Alan wanted to share with us this amazing bridge lithograph which can be purchased here: 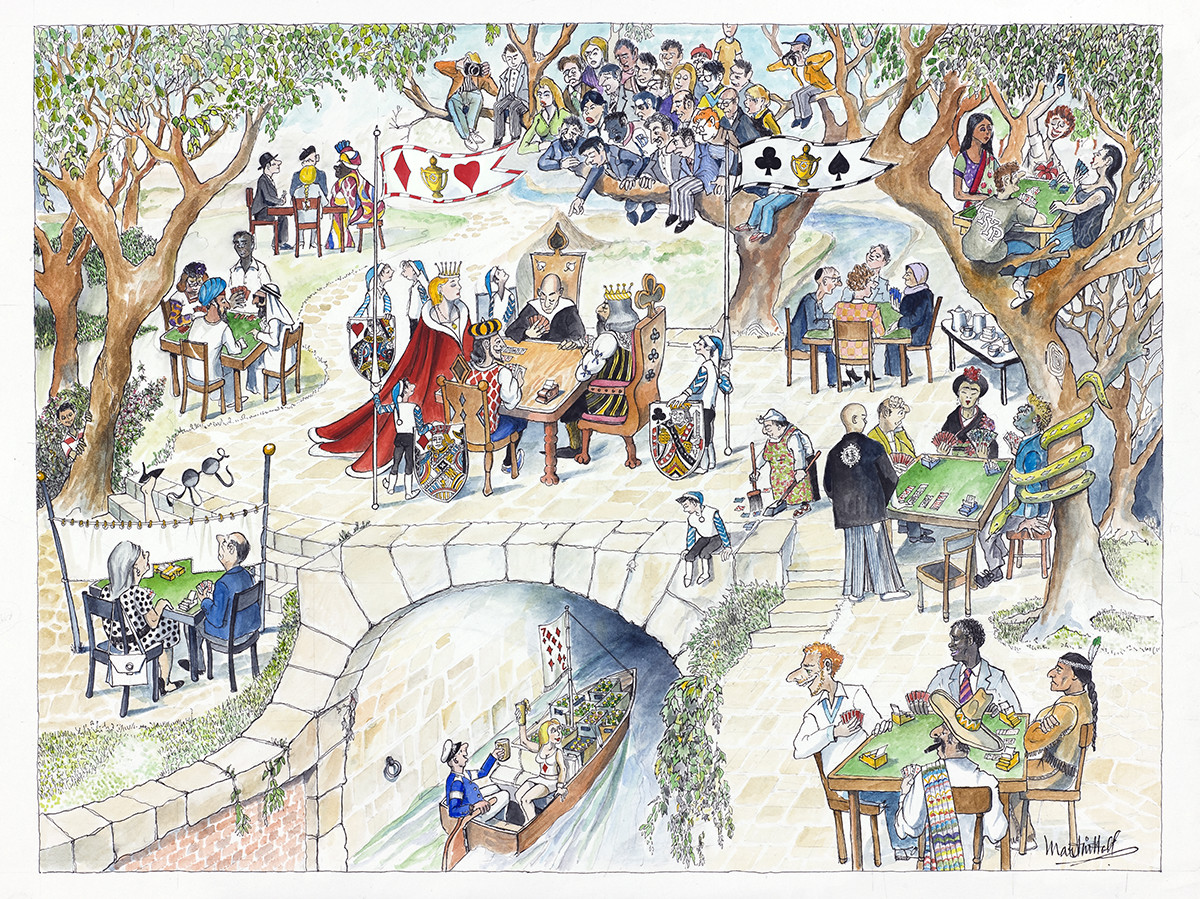