Gender neutrality is a movement that has really picked up momentum in recent years. From clothing to children’s toys, tastemakers are changing things to help prevent gender discrimination – with playing cards being the latest item to join the crusade.

Indy Mellink, a forensic psychology graduate, wondered why the male monarch should be valued higher than the female. So, she decided to create GSB Cards, deck of cards that do away with the very outdated notion that women are worth less than men.

Instead of having Jacks, Queens and Kings, Mellink has created a deck of cards with gold bars, silver coins and bronze shields as the top ranks. She was encouraged to create the cards by her father, and designed the look of the deck herself.

“If we have this hierarchy that the king is worth more than the queen then this subtle inequality influences people in their daily life because it’s just another way of saying ‘hey, you’re less important’,” she said.

Shortly after she created the cards, the first 50 decks were quickly purchased by friends and family which gave her the idea to expand her reach. International card players were eager to get their hands on a deck and, within a few months, Mellink had shipped nearly 1,500 of her gender neutral playing cards to countries like Germany, France and the USA.

Across the internet, most people have lauded Mellink’s new gender-neutral playing cards. Many card players have applauded her for bringing attention to the gender hierarchy that is ingrained in playing hand rankings.

However, there are some players who haven’t embraced the new, modern take on playing cards. Piers Morgan, who is known for being outspoken on a wide range of topics, has stirred up a debate online.

With just three letters, he invited over a thousand comments from Twitter users. While many called the project pointless, others said it was harmless for someone to privately create and sell her own playing cards. At the very most, Mellink’s deck would inspire some heated discussions.

Plus, it could be a lot worse. There is a set of poker cards out there with a different serial killer printed on each one. So, if people want to get offended about a deck of cards, there are much more appropriate options.

Will We Be Seeing Gender Neutral Cards in Casinos Anytime Soon?

It might be a while before gender neutral playing cards become the norm. It does seem like it would take some getting used to in order to reassociate the new cards with hand rankings in different games. If they do catch on, it’s likely that online casinos would have a much easier time swapping the decks since it would be costly for brick-and-mortar venues to do so.

Still, the main reason for slow uptake would be that most people simply just don’t think it’s necessary to make the change to gender neutral playing cards. Mellink’s friends and family, who were the first to try out the cards, said they had never noticed the gender hierarchy in cards – so, it will likely be a while before enough people catch on to make a larger change. 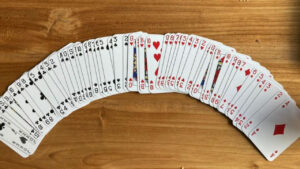