All About Bridge Screens

If you’ve ever been to the front of a bank teller’s desk, bridge screens will remind you of the tray-and-screen used to transfer money back and forth. These screens are a device utilized in tournament play to reduce cheating or information exchange during the game. Even though they’re effective at doing just this, a lot of players find the use of bridge screens to be restrictive, limiting and awkward. Here’s a bit more on them, their official regulation and a possible alternative.

Bridge screens are wooden ‘walls’ that stretch across a bridge table from corner to corner. This way partners cannot see each other. So if you hate your partner’s bid, and make a face, he won’t see it and will carry on merrily bidding. The images below will give you a pretty good idea what a bridge screen looks like. 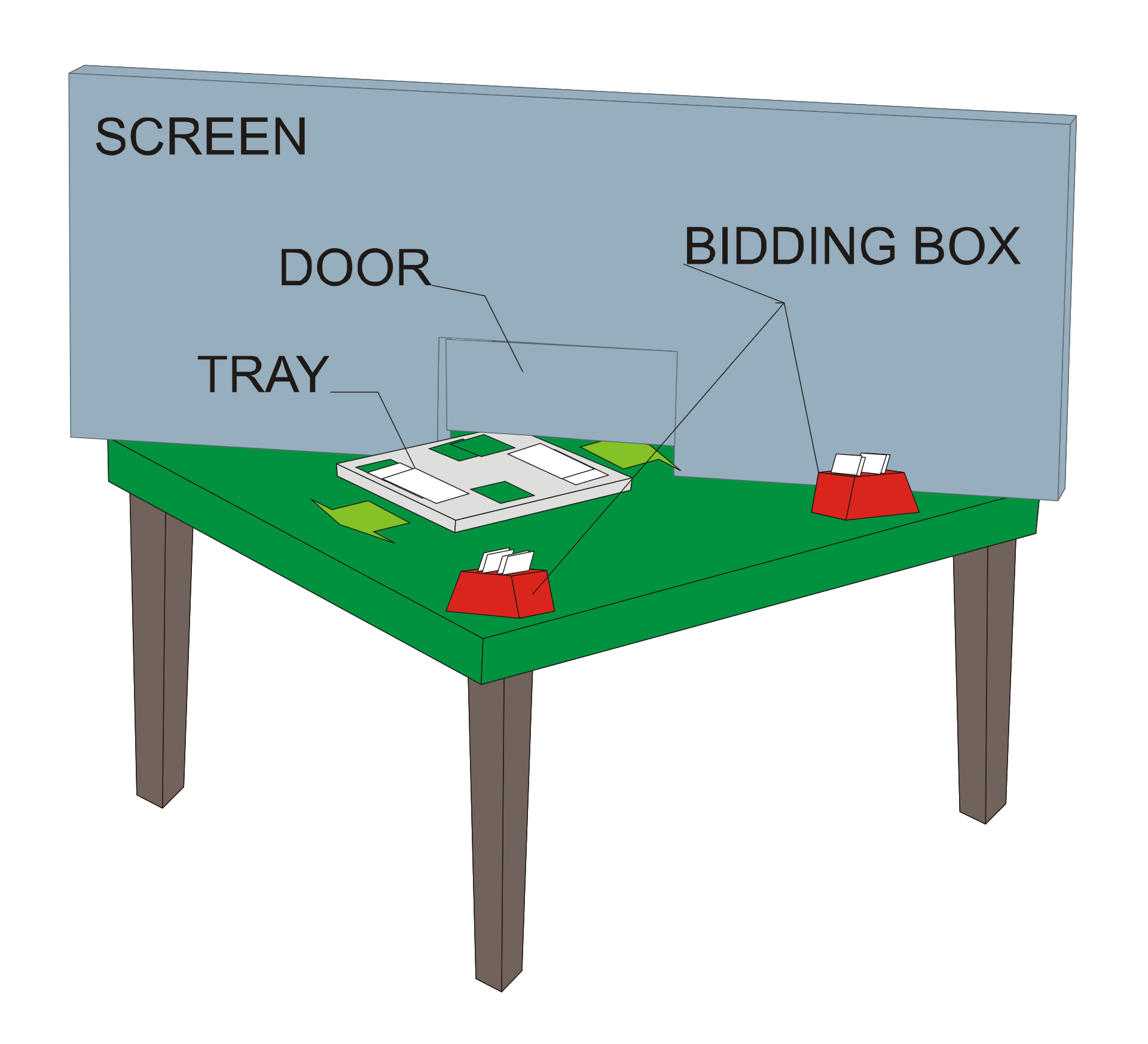 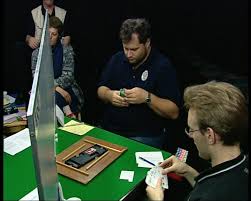 SevenNoTrumps is a leading provider of bridge-related stuff, from card decks through to bridge screens.

“Screens are used to help minimize the incidence of cheating in high-level bridge competitions. They divide the bridge diagonally to make it difficult for partners to interact with one another visually, and they’re used at many national and international events.”

They say the screens used in the Canadian Nationals are long wooden panels that attach at the corners with a wooden bracket. They’re cheap to produce, easy to transport and they can help to avoid an unfortunate incident of an international cheating disaster.

The World Bridge Federation is using screens for the World Championships. WBF Regulations for Bridge Screens are available here. In short they detail:

Screens will be used whenever possible in a World Bridge Championship.1.1Description of the OperationThe North and East players sit on the same side of the screen throughout. It is North’s responsibility to place the board on, and to remove the board from, the bidding tray. It is West’s responsibility to adjust the screen aperture. The sequence is this: North places the board on the bidding tray. The aperture is closed (and remains so during the whole of the auction period) so that the bidding tray can just pass under it. The players remove the cards from the board.

Calls are made with the cards from the bidding box. The player places the selected call in the bidding tray, which will be visible only on the player’s side of the screen. A player’s first call should touch the extreme left of his own segment of the bidding tray, with subsequent calls overlapping neatly and evenly to the right. Players should make every effort to perform these actions as quietly as possible. With screens in use a call is considered ‘made’ when placed on the tray and released.

After two players on the same side of the screen have made their calls, North or South (as the case may be) slides the bidding tray under the centre of the screen so as to be visible only to the players on the other side. They then make their calls in like manner and the bidding tray is slid back again. This procedure is continued until the auction is completed. It is considered desirable that players should vary the tempo randomly when returning the tray under the screen.After all four players have had the opportunity to review the auction (equivalent to the right of having the auction restated) the players replace their bidding cards in their respective bidding boxes.

After a legal opening lead is faced, the screen aperture is opened the minimum necessary to permit all players to see the dummy cards and the cards played to each trick. If a defender exposes a card and, because of the screen, declarer does not see it, dummy may draw attention to the irregularity.

Check out the World Bridge Federation Facebook Photo Album for lots of examples of bridge tables with bridge screens.

The first official use of bridge screens was for the Bermuda Bowl in 1975 – but unfortunately this also showed one of the largest flaws of the screen after what’s usually referred to as the “foot-tapping” scandal in which two players were caught out signalling the other by tapping their feet, a little reminiscent of how children created the Enfield poltergeist.

Some bridge screens extend to cover the bottom of the table too, just to make sure there’s no signalling or footsie at the bridge table.

One of the most immediate things you’ll notice about bridge screens is that they are big and heavy. Wikipedia also notes:

The Bridge Base Online Hybrid Screen

Instead of cards, players are issued with tablets instead – and with a customized bridge screen in the middle that still allows for you to see your opponent, the entire thing is connected to a central online system.

Without physical cards, many obvious ways of card cheating are rendered impossible, and the system records all plays automatically. The game can be analyzed and written about in an entirely new way from there.

Interested? BBO built a prototype of the Hybrid Screen, with photos, available to see here.

This Hybrid Screen would work pretty well with LoveBridge tablets as well – LoveBridge has been undergoing trials this year at championships around the world. Read more about LoveBridge here.