The Royalty of Bridge

Cricket might be a game of gentlemen, but bridge seems to be the game for, well, everyone – it just happens to income some royal and celebrity players, too. Great Bridge Links went and took a look at some royals, presidents and world leaders who also happened to be avid bridge players just like the rest of us here.

According to an article on the PokerStars.com blog, JFK was himself an avid poker player (though evidence thereof anywhere else is likely obscure, and if readers can provide any evidence to that effect, talk to us in the comments!), though playing bridge seems to be something that runs in the family.

In a letter to her daughter Patricia ‘Pat’ Kennedy, Rose Kennedy writes: “By the way, I hear you are an excellent bridge player and I cannot understand how you accomplished that art.” You can read the rest of the letter compiled in the collection The Letters of John F. Kennedy.

The current monarch of England is not known for playing bridge, although she has ‘opened’ 15 bridges in the United Kingdom.  Edward VII (royal from 1901 until he died in 1910) on the other hand,  would accompany the Queen to visit her family in Denmark and inevitably ended up playing games of bridge – whist, then – with the family. That does not mean that he enjoyed it. In fact, according to Edward VII: The Last Victorian King, the games were ‘low stakes’ and only played for the queen’s sake. 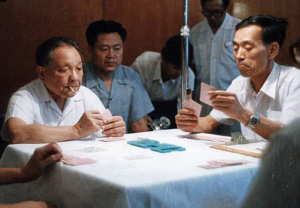 Deng Xiaoping took over as the leader of China from 1978, two years after the death of Mao. Many books on his life and history mention the fact that he was an avid bridge player – some even attribute the game to some of the political moves he made during his lifetime. According to this document, he learned bridge from a friend in 1952, after which bridge took over his life as his main pastime almost entirely. Xiaoping’s love of the game was a huge step towards the popularity and recognition of bridge in China. 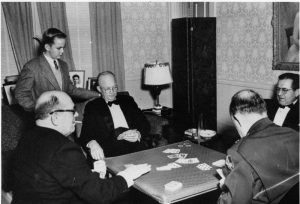 Dwight D. Eisenhower (his middle name was David, by the way) was the 34th president of the United States, between 1953 and 1961. What most people don’t know about him is that he really, really loved playing a good game of bridge. He took it a little further, and being a bridge player was apparently a prerequisite for being part of Eisenhower’s officers. Again, his prowess with bridge is often mentioned in the same vein as his political strategy. Take a look at this piece by Michael Ledeen from the Wall Street Journal looking at bridge over chess as the defining game of strategy and war.

Other reported avid bridge players included Winston Churchill and, at least according to the NY Times, FW de Klerk. Let us know about any others you know of in the comments.