How big is the biggest house of cards ever built? How about the biggest structure made from playing cards? We’ve gone digging for some of the coolest and weirdest playing-card records on the books. Check them out below.

The world records for the farthest and highest playing card throws are held by the same person: Magician Rick Smith Jr. The first record took place at the Cleveland State Convention Center (OH) on the 21st of March, 2002 – and the card was thrown an incredible 65.96m (216 ft 4 in). He set the second record at the Great Lakes Science Centre (OH) on the 14th of March, 2005, and threw the card up in the air a whole 24.41m (70 ft 3 in).

Just how good do you think your memory is when it comes to scores and cards? Canadian Dave Farrow memorized 59 decks (3, 068 cards) on the 2nd of April 2007 at CTV Studios in Canada. Not half bad considering I forget to buy eggs at the grocery store…

The Biggest House of Cards 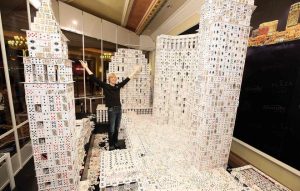 So you’re just going to buy one more deck, eh? That’s likely what China’s Liu Fuchang said until they ended up with 11, 087 decks in their collection, making it the largest collection of playing cards in the world – at least for now.

The biggest online poker tournament, held by PokerStars, contained 253, 692 players and 470 hands, lasting from the 6th to the 7th of October, 2015. The champion, DaDumon, walked away with a winnings of ten grand.

The Largest Bridge Fundraiser Ever

The largest bridge drive in one place happened in the Netherlands for the REMU Bridge Record and involved 1, 543 pairs – that’s 3. 086 players – getting together at the Amsterdam Arena.

Interested in giving this a go yourself? Check out the the latest slot machines online at My Slot Machines Dot Com.