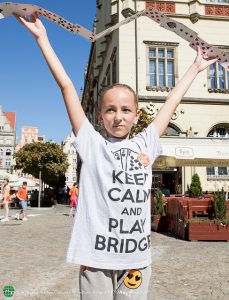 from the World Bridge Federation:

Bridge is the ultimate trick-taking card game, easily the greatest source of enjoyment that four people can have with a pack of cards.

Bridge is a sport: the World Bridge Federation is recognised by the International Olympic Committee. Just like every sport, Bridge offers enormous benefits to its players.

It is enjoyed by tens of millions of people throughout the world – more so than any other card game. In social circles it is considered the card game. Whether you play casually among friends or seriously in clubs and tournaments, you will find it to be fascinating, challenging and enjoyable.

from the European Bridge League:

The game of bridge is a mindsport card game to be enjoyed by players of all ages. Four players form two partnerships, taking the points of the compass. North plays with South and East with West. Each player receives thirteen cards (your hand) which should be sorted into suits: spades, hearts, diamonds and clubs.

The game is divided into two phases, bidding and play.