Playing bridge isn’t the only common interest that connects bridge players: The bridge table is the best place to share your other common interests, meet new people and argue about who’s got the best game strategy. But how is bridge representation for the LGBTQ community? We took a closer look at LGBTQ-related bridge clubs, meets and resources.

LGBTQ is an acronym which stands for Lesbian, Gay, Bisexual, Transsexual and Queer. (Yes, the acronym has been expanded several times since it came about – some sources argue twelve characters; we’ll leave that up to you.)

The West London Gay Bridge Club gets together once a week to play duplicate bridge, with the London Gay Bridge Tournament starting in October. They offer classes for the very beginners to bridge, and help you to find a bridge partner if you don’t have one already. There’s a charge of £6 for annual membership, though you can still join in to play if you aren’t a member – yet.

Quick Tricks Duplicate Bridge Club is the only ACBL sanctioned gay bridge club in Florida (based in Fort Lauderdale) and boasts with more than 250 members. They offer bridge events throughout the year, including pizza parties, an annual holiday party – and even a Caribbean bridge cruise! Games take place on Tuesday and Thursday evenings and Saturday afternoons.

The Hastings Rother Rainbow Alliance was founded in 2003 to support local LGBTQ interests in Hastings and Rother – that’s East Sussex, if you were wondering. You can join them for a game of bridge through their Rainbow Aces group, who meets at the St. Leonard’s pub for a set of games on Sundays.

The Rainbow Bridge Social Club, based in New South Wales, started off as a mother’s project to seek peer-support for her gay and intellectually disabled son, Charitha. Today, the Rainbow Bridge Social Club seems to be going strong, aimed at kids 16-26 who, well, might need a little extra help meeting people – something which we’d say is true for all teenagers! Keep an eye on their Facebook page for more information and scheduling.

Meetup is a site connecting people and their interests, and they’ve got a category for listing bridge games and events. (Use common sense when meeting anyone off a website, and for extra safety stick to reputable bridge club events only!)

The Bridge Guys used to have an excellent page of Gay Bridge Clubs which seems to be missing at the moment. But you can probably find information if you email. 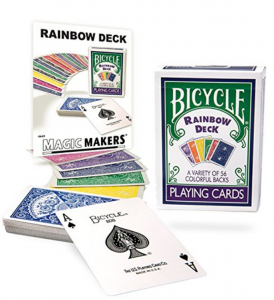 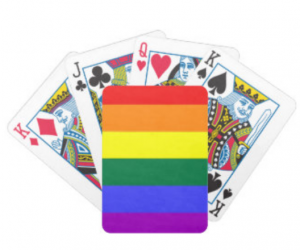 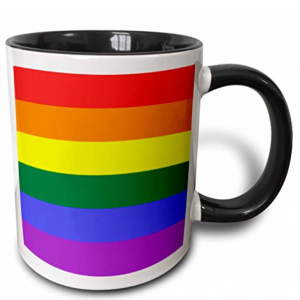 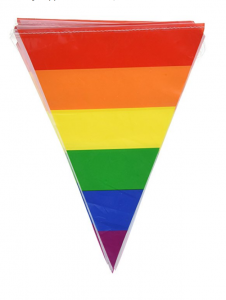 Looking for something cool to take along to the next event, or maybe planning your own? Here’s what we could find.

The Bicycle Rainbow Playing Card Deck comes from the US Playing Card Company, who generally makes some of the best playing cards around. You can also check out some of these LGBTQ-themed playing card decks from Zazzle. Show your pride at (or away from) the bridge table with these pride-flag mugs from Amazon.

And my personal favourite – show your pride and support for diversity at the bridge club this month with this awesome Rainbow Pennant Banner.

The Rainbow Store on What’s On Queer BC has lots more rainbow items – enjoy your pride!